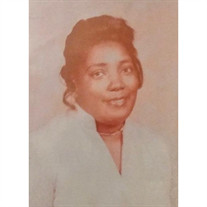 Anna Lois (Oakley) Witherspoon, 90 was born on January 8, 1928 to the late Charles Oakley, Jr. and Irene (Gray) Oakley in Montgomery, WV was called home to meet the Father, Sunday, February 25, 2018. Anna was preceded in death by her husband in 2015 after 61 years, Rev. Dr. David C. Witherspoon, Sr.; brother, Charles Oakley; and her sons, Thomas Lewis and David C. Witherspoon, Jr.  Anna left Montgomery, WV in 1944 to move to Huntington to be with her big brother Charles Oakley and big sister Betty Oakley.  While in Huntington she attended Douglas High but returned to graduate from Washington High School where she had lead her High School Women's basketball team to 2 women state championships.  In 1951 and 1952, Anna gave birth to her first child a little girl named Edna Marzetta, and a son Thomas Lewis.  In 1954, Anna met and after a short courtship 2 weeks, married Rev. Dr. David C. Witherspoon, Sr. and gained a second daughter Diane and son David, Jr. 1954 and 1956 brought forth her baby Girl Armilenta and another David, Jr. in 1956.  Most of Anna's years were spent as a great mother, wife and loyal subject to her Lord and Savior Jesus.  During her time in the workforce she worked at Hills Department stores and Fashion Bug as an Assistant Manager.  Anna loved kids so much she took the job of Popcorn Lady at Simms Elementary where she gave away more popcorn than she sold.  Anna later joined Calvary Baptist church where she could perform her greatest passion singing.  She joined the choir and loved to sing her favorite songs Honey in the Rock, Precious Lord and so many others while giving praises to her Lord and Savior Jesus.  In 2009, Anna was inducted into the West Virginia All Black Schools Sports and Academic Hall of Fame for her achievements on the basketball court.  Anna Lois is survived by her sister, Betty Hughes Carter of Huntington; daughters, Diane Reddix of Washington D.C.; Edna Flournoy of Buford, GA and Armilenta Witherspoon Radford (Willard) of Covington, GA; her son, baby boy David Omodare of Stone Mountain, GA; 25 grandchildren, 31 great grandchildren and 22 great-great grandchildren.  Visitation will be held from 6:00 - 8:00 P.M., Friday, March 9, 2018 at Ferrell-Chambers Funeral Home.  Funeral services will be conducted at 1:00 P.M., Saturday, March 10, 2018 at Antioch Missionary Baptist Church with Rev. Reginald Hill, officiating.  Family will welcome friends on Saturday at 12 Noon.  Burial will follow at White Chapel Memorial Gardens.  Affectionately known as Momma or Sister Anna, she never met a stranger, only friends that didn't live in the neighborhood.  She was loved and appreciated by anyone who met her. She always had a question for the younger generation.  If they didn't have an answer... off came the house shoe.  One of her favorite sayings was, "Don't give up, if the task seems low you might succeed with another blow."Online condolences may be expressed to the family below. FC18-032

Anna Lois (Oakley) Witherspoon, 90 was born on January 8, 1928 to the late Charles Oakley, Jr. and Irene (Gray) Oakley in Montgomery, WV was called home to meet the Father, Sunday, February 25, 2018. Anna was preceded in death by her husband... View Obituary & Service Information

The family of Anna Lois Witherspoon created this Life Tributes page to make it easy to share your memories.

Send flowers to the Witherspoon family.