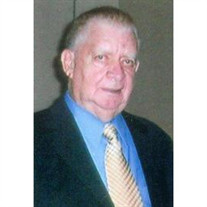 Arlen Lee Stevens was born in Huntington, West Virginia on July 19, 1932 to the union of the late Roy and Gladys (Dolby) Stevens. He attended Cabell County Public Schools, Barnett Elementary and Douglass High School where he played football and basketball. During this time, he met his best friend, Arnett Brogdon and they remained friends throughout his life. As a child, he could often be seen with his father and younger brother, Lionel, doing odd jobs in the neighborhood. In 1953, he was drafted into the United States Army where he served in the 51st Signal Corps, stationed in Uyongbu, Korea and subsequently in Japan. He attained the rank of Sergeant and was honorably discharged in 1955. Arlen was a Medical Research Technician at the University of Cincinnati and Children's Hospital. He was very proud of his work with Dr. Albert Sabin in the development of the oral polio vaccine. He was a member of the Greater Cincinnati Chapter Tuskegee Airman, Inc. Arlen was an avid thoroughbred horse enthusiast and he and his friends could be found most Saturdays at the track. He became a father to several young men whose own fathers were deceased. They often called him for advice or just to chat. He accepted Christ at an early age and was baptized. He became a member of New Life Missionary Baptist Church on October 5, 2008. He was the father to four children from a previous marriage: Denise, Arlen Jr., Lisa and Mark. In 1964, he met and later married Lorraine Bennett. They were married for 47 years. Arlen was preceded in death by four brothers, Lionel, Harold, Kenneth and Verlin; and three sisters, Elma, Louise and Lucille. He leaves to cherish his memory: a loving wife, Lorraine; a brother, Lawrence Stevens (Thelma); sons, Arlen Stevens, Jr. (Brenda) and Mark Stevens (Beatrice); daughters, Lisa Stevens and Denise Johnson; eight grandchildren and nine greatgrandchildren; godchildren, Christin McKenzie and Carla O'Neal; adopted daughter, Marie Hood, in 2005, and became an instant grandfather of four additional grandchildren; and a host of inlaws, other relatives and friends.

The family of Arlen Lee Stevens created this Life Tributes page to make it easy to share your memories.

Send flowers to the Stevens family.