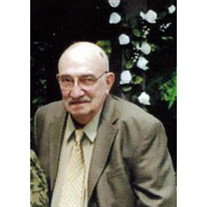 Arthur John Graziano, 76, of Huntington, WV, passed away Saturday, September 3, 2011, in Cabell Huntington Hospital. Funeral and Rosary Service will be held 10:00 a.m. Wednesday, September 7, 2011, at Ferrell-Chambers Funeral Home, Huntington, WV, with The Rev. Msgr. Luciana officiating. Arthur was born July 19, 1935, in Weehawken, New Jersey, a son of the late John Joseph and Albina Abriola Graziano. He was a graduate of College of the Holy Cross, Class of 1957, and a Navy Veteran, serving his country from 1957-1960. He was a retired State of West Virginia employee. He is survived by his loving wife of 53 years Patricia Walls Graziano; a son John Graziano and his wife Martha and Faith and Ford Bowden of Garner, NC, two daughters Kathleen Graziano of Bradford, MA and Tish Graziano of Huntington, WV; one brother John Graziano of Mountainside, NJ; and Granddaughter Caitlyn Graziano-Runyon and her fiancé Aaron Benedict of Huntington, WV. Visitation will be Tuesday 6-8 p.m. at Ferrell-Chambers Funeral Home. In lieu of flowers donations may be made to the Cabell Huntington Children's Hospital, noting "In Memory of Arthur Graziano". Condolences may be expressed at www.ferrell-chambersfuneralhome.com

The family of Arthur John Graziano created this Life Tributes page to make it easy to share your memories.

Send flowers to the Graziano family.