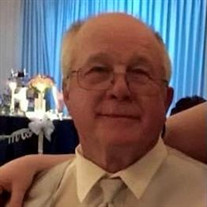 Charles Robin Sanders Born: July 3, 1947 in Dallas, TX. The first born of Charlie and Margie Sanders, Charles grew up in DeSoto, TX. A fantastic athlete, Charles excelled in football, track, boxing and, later, in golf. In 1966 he married his grade school sweetheart Linda Jost. Over the years they had many adventures, not the least of which was raising 3 children together. Charles delighted in his family, often taking spur of the moment weekend camping trips together. In keeping with his love of golf he pursued a career in that field. He worked for a time as the head greenskeeper for a course in Cleburne, TX before retiring from the Squaw Valley Golf Course in Glen Rose, TX. In his retirement years he took many trips with Linda and their now numerous grandchildren to many Texas locations. Charles passed away on October 30, 2021 in South Charleston, WV after a long battle with Alzheimer’s disease. He is preceded in death by his wife Linda, parents Margie and Charlie Sanders, sister Candace Sanders, and brother Michael Sanders. He is survived by daughter and son-in-law Amy and Robert Newlin of Culloden, WV, son and daughter-in-law Gary and Carol Sanders of Glen Rose, TX, and son and daughter-in-law Jeff and Tori Dickens of Newark, TX. He is also survived by grandchildren Courtney Rinehart and husband Garrett, Trevor Dickens, Lyndsey Pittore and husband Ephraim , Nicholas Kuhl, Katherine Dickens, and Jacob Dickens, and one great grand daughter Giana Pittore. Ferrell-Chambers Funeral Home is honored to serve the Sanders family. Online condolences may be expressed to the family at tristatecremationsociety.com.

The family of Mr. Charles Robin Sanders created this Life Tributes page to make it easy to share your memories.

Send flowers to the Sanders family.