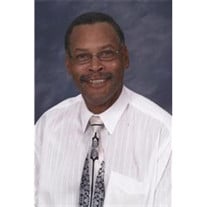 Obituary Clifford Lee Alexander 58 of Huntington, WV was born July 9, 1954; a son of the late Odessa Dunning Reynolds and Luther Alexander. He went home to be with the Lord Thursday, August 16, 2012 at his residence. In addition to his parents, he was preceded in death by one son Clifford Jamal Ingram Alexander and one brother Luther Alexander. Clifford was a member of Antioch Missionary Baptist where he served on the Deacon Board, in the Male Chorus, Mass Choir, and was of the Simeon Tribe. Clifford was a U.S. Army Veteran. He was a retired employee of the City of Huntington. He being the earnest hardworking man that he was he held several jobs throughout the course of his life. He also was masterfully skilled in being a Handy Man and cutting grass; in which he believed to be a work of art and not just a task. I quote, "Cutting grass is NOT just pushing the lawnmower back and forth, but you have to do it from your heart in order to do it the right way." Clifford leaves to cherish his memories his daughter Gracie Maxine Harmon (Thomas White); a stepdaughter: Kimberly Lawson. Three grandsons: Meterrian Ingram Alexander; Malikai Jamal Harmon, and Elijah Maurice White. Six brothers: Dr. C.W. (Peggy) Dunning, Rev. Les Dunning, Dr. O.H. (Laverne) Dunning II, Marcus Alexander, Steven Dunning, and David Alexander. Two sisters: Eda Dunning and Anna Dunning; as well as The Harmon Family, a host of nieces, nephews, cousins, and several other relatives, and friends. A celebration of life will be 1:00PM Wednesday, August 22, 2012 at Antioch Missionary Baptist Church, with Pastor Reginald Hill, Officiating. Friends may call from Noon until the time of the service at the church. Scripture: II Timothy 4:7-8 I have fought the good, worthy, honorable, and noble fight, I have finished the race, I have kept (firmly held) the faith. 8 As to what remains henceforth there is laid up for me the victor's crown of righteousness [for being right with God and doing right], which the Lord, the righteous Judge, will award to me and recompense me on that great day-and not to me only, but also to all those who have loved and yearned for and welcomed His appearing (His great return). GOD GIVES HIS TOUGHEST BATTLES TO HIS STRONGEST SOLDIERS

Obituary Clifford Lee Alexander 58 of Huntington, WV was born July 9, 1954; a son of the late Odessa Dunning Reynolds and Luther Alexander. He went home to be with the Lord Thursday, August 16, 2012 at his residence. In addition to his parents,... View Obituary & Service Information

The family of Clifford L. Alexander created this Life Tributes page to make it easy to share your memories.

Send flowers to the Alexander family.