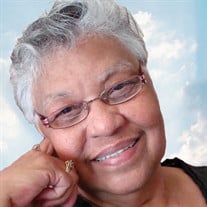 Constance Lucille Claytor Fitzpatrick Cannon “It’s Another Day, that the Lord Has kept Me” February 18, 1938 was not just another day in the city of Beckley, West Virginia, It was the day that Constance Lucille Claytor was born. A daughter of the late Luther and Lucille Gregory Claytor. Constance lived her early childhood years in the city of Mabscott, West Virginia. It was while living in Mabscott that she received her early education and religious training, where she first fell in love with music, attending church and traveling with her father to concerts by his quartet.. At a young age the family relocated to Huntington, West Virginia and united with the Calvary Missionary Baptist Church. It was at Calvary that she began singing and found a love for the Lord and singing in the church, a love that continued throughout her life. Her education continued in the Cabell County Public School System, where she was a Graduate of Douglas High School in the class of 1955. In 1958 she was united in marriage to the late Ernest Fitzpatrick, Sr and relocated to Ashland, Kentucky. To this union 3 children were born. Ernest, Jr, Yolanda and Shawn. Moving back to Huntington, Constance was employed as one of the two first black female bus drivers for the Huntington Transit Authority, until her retirement. In 2004 she began working as a female attendant at Callender Funeral Home, where she remained until 2011. She was a faithful member of the Sixteenth Street Baptist Church, where she was a member of the church choir, she will always be remembered for reminding the church that “It’s Just Another Day, That The Lord Has Kept Me”. Although due to failing health and not being able to attend services, sister Cannon, continued to show her love for the church by soliciting patrons for the church anniversary and was one of the largest contributors to the anniversary. “I’m So Glad, That the Lord Has Kept Me” On March 17, 2022 the Lord who had kept Sister Cannon for eighty four years, called her to join her parents, Luther and Lucille, Her brother George Claytor and sister Cornella Owens, nephews, Charles Owens Jr and Mose Dickerson, III, a niece Stacy Dickerson and a host of other relatives and friends who preceded her in death. She leaves to cherish her memory; Her children, Ernest (Regina) Fitzpatrick, Jr of Huntington, West Virginia, Yolanda Fitzpatrick, of Beckley, West Virginia and Shawn (Kara) Fitzpatrick of Nitro, West Virginia; 8 Grandchildren, Sheldon, Corey (Kendra), Elias, Elisabeth, Katlyn (Derrick), Ian, Taylor and Jacob. 4 Great-Grandchildren, Haiden, Isaac, Emeri and Kaydence; A Sister Connie (Mose) Dickerson, of Alabama; Special nieces, Stephanie Henry and Lisa Hall; Special cousins, Renee Madison and Jacqueline Johnson; Adopted love son, Gary (Elaine)Turner. And a host of other relatives and friends. A Home-Going service will be conducted at 1:00 P.M, Saturday, March 26, 2022 at Sixteenth Street Baptist Church, Huntington, WV with Pastor Roy Terry officiating. Interment will immediately follow in Woodmere Memorial Park, Huntington, WV. Visitation will be 11:30 A.M to 1:00 P.M, Saturday, March 26, 2022 at Sixteenth Street Baptist Church. Arrangements have been entrusted to Ferrell-Chambers Funeral Home, Huntington, WV. Online condolences may be expressed to the family at Ferrell-ChambersFuneralHome.com. tyler matney is inviting you to a scheduled Zoom meeting. Topic: Constance Cannon Home-Going Service Time: Mar 26, 2022 01:00 PM Eastern Time (US and Canada) Join Zoom Meeting https://us02web.zoom.us/j/88009337867?pwd=dFhoL1Mzb1NZNXdTMTZhOGNRWVNWdz09 Meeting ID: 880 0933 7867 Passcode: 7777 One tap mobile +13126266799,,88009337867#,,,,*7777# US (Chicago) +16465588656,,88009337867#,,,,*7777# US (New York) Dial by your location +1 312 626 6799 US (Chicago) +1 646 558 8656 US (New York) +1 301 715 8592 US (Washington DC) +1 346 248 7799 US (Houston) +1 669 900 9128 US (San Jose) +1 253 215 8782 US (Tacoma) Meeting ID: 880 0933 7867 Passcode: 7777 Find your local number: https://us02web.zoom.us/u/kVRKnChU3

The family of Constance Lucille Cannon created this Life Tributes page to make it easy to share your memories.

Send flowers to the Cannon family.