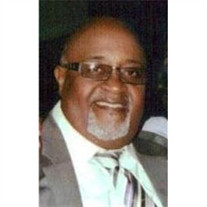 Dorsey was born August 23, 1948 in Huntington to the late Dorsey S. Bass Sr. and Ruth Dalton Bass. He went home to be with the Lord on August 25, 2012 at Cabell Huntington Hospital. He was a life long resident of Huntington attending Barnett, Douglass and Cammack Schools then graduating from Huntington High School in 1966. Dorsey served honorably in Vietnam as a medic. Dorsey's life long passion was using his gifts to serve the Lord. He was baptized and filled as a young man in August 1961 at the Original Glorious Church of God in Christ. As a young boy he was truly gifted and drawn to anything musical always tapping out rhythmic beats on anything available (driving his family crazy). He moved on from there to keyboards and the piano. Although, he briefly took piano lessons he was basically self-taught. His musical ear allowed him to play anything heard. His mastery of the piano led to his being named choir pianist at the age of thirteen taking over the responsibility from his mother, Ruth Bass. He served as Choir Director and Organist for decades at the Original Glorious Church of God in Christ and from there the Glorious Church. Dorsey was always available when called upon to play at other Huntington churches as well. During those years he formed and sang with many Gospel groups including, the Gospel Three. He was named W.Va. State Choir Director in 1970 serving for sixteen years. Dorsey was also blessed with a wonderful singing voice and composed over one hundred songs. His Christmas song, "Messiah" has become a standard at the Glorious Church. For sixteen years, Dorsey hosted a very popular Gospel show on Marshall University Radio. In May 2005, Dorsey was ordained as a licensed minister with the Glorious Church of God in Christ. Dorsey is survived by a daughter, Danee Bass of Huntington; three sisters: Nella Cottman, Philadelphia, Pa., Carol Chambers, Huntington, and Faye Bashir, Atlanta, Georgia. His wife, Carmen Renee Bass, preceded him in death. In addition, he leaves to mourn a fiancée, Faye Barnes, Chillicothe, Ohio and a host of loving nieces, nephews, in-laws, and cousins. DB, well done, rest in the presence of the Lord; you are loved and greatly missed! Funeral Services will be held 12:00pm Saturday at The Original Glorious Church of God in Christ, 1516 10th Ave. on Saturday, September 1st. Visitationwill be from 10:00am until service time at the church. Ferrell-Chambers Funeral Home is assisting the family

Dorsey was born August 23, 1948 in Huntington to the late Dorsey S. Bass Sr. and Ruth Dalton Bass. He went home to be with the Lord on August 25, 2012 at Cabell Huntington Hospital. He was a life long resident of Huntington attending Barnett,... View Obituary & Service Information

The family of Dorsey S. Bass, Jr. created this Life Tributes page to make it easy to share your memories.