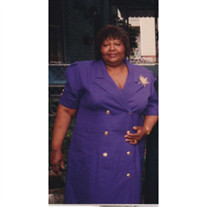 Elizabeth Jean Williams, 76, of Williamson, WV passed away Wednesday, May 29, 2019 at St. Mary's Medical Center.  She was born on May 21, 1943 in McVeigh, KY to the late parents, Thomas Williams, Sr. & Geneva (Tinyhill) Williams.  She is preceded in death by 3 siblings, Thomas Williams, Jr., Anna Williams and Daryl Webster.  Jean was a resident of Heartland Manor Nursing Care for the last 1 1/2 years.  Jean accepted Christ as her savior early in life, was baptized and became a member of Shiloh Baptist Church.  After graduating high school, she relocated to Cleveland, OH, where she joined the Union Grove Baptist Church and became an active member of the Usher Board.  Jean worked for more than 20 years in the dietary department of a Cleveland area hospital before she retired.  At that point, she began to babysit the child of a family friend and cared for him until he was old enough to attend school.  She was a loving and indulgent Auntie!  Having no children of her own, she quickly became that doting figure who always made allowances for her nephews and nieces misbehavior.  When necessary, she would gently scold them, always with that loving touch.  She was renown among the family for her fried chicken!  A good cook in general, that was the one dish always requested.  If she knew her nephews were coming, she got busy!!  Jean was also an avid sports fan, as long as Cleveland was playing.  She enjoyed watching all of the city's teams:  Indians, Cavaliers, and Browns.  She leaves behind to cherish her memory; sister, Mabel Childress (Walter) and Harold Williams; her precious fur baby, AJ and a host of many nieces, nephews, cousins, other family members and special friends, including Clarence.  Funeral services will be conducted at 1:00 P.M., Tuesday, June 4, 2019 at Ferrell-Chambers Funeral Home with Rev. Gerald Dotson and Minister George Childress, officiating.  The family will welcome friends at 12 Noon at the funeral home.  Online condolences may be expressed to the family below. FC19-046

Elizabeth Jean Williams, 76, of Williamson, WV passed away Wednesday, May 29, 2019 at St. Mary's Medical Center.  She was born on May 21, 1943 in McVeigh, KY to the late parents, Thomas Williams, Sr. & Geneva (Tinyhill) Williams.  She is preceded... View Obituary & Service Information

The family of Elizabeth Jean Williams created this Life Tributes page to make it easy to share your memories.

Send flowers to the Williams family.