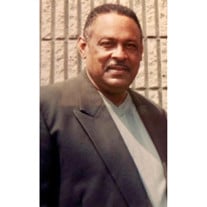 Mr. Excel "Ferg" Edward Ferguson, 72, of Huntington, WV, passed away on March 8, 2018 at Prattville Baptist Hospital in Prattville, AL.  Excel was born March 19, 1945 in Beckley, WV.  He is preceded in death by his parents, Dubois and Annie Kate Ferguson and his son, Excel E. Ferguson, Jr.; and his brothers, Clarence, June, Herbert and Howard Ferguson.  Excel graduated from Stratton High School in 1963 and then went on to Bluefield State College to become an architect.  It was there where he met the love of his life, Portia Ferguson.  Excel and Portia wed in 1965 and later moved to Washington, D.C. where he pursued brick masonry and eventually moved to Huntington, WV where they had and raised their children; Excel E. Ferguson, Jr., Henry Ferguson, Porsetta Comer and Michael Ferguson.  Excel worked all of life while caring and providing for his family.  He was a diligent and hardworking man who wanted the best for his family.  Excel was a strong and proud man who believed in working hard to earn what you want in life.  He worked for over 30 years at Ashland Oil Refinery before retiring in the year 2000.  Following his retirement, Excel enjoyed fishing, traveling, hanging out with prior co-workers and visiting family.  He also started and enjoyed gardening in his own backyard.  Excel was a brave and courageous man who took on the disease of pancreatic cancer from March 2017.  He fought to the end, but eventually the disease took over and Excel passed away with his family by his side. He will be dearly missed by his surviving children, Henry Ferguson (Jenelle) of Baltimore, MD, Porsetta Comer (Windell) of Prattville, AL and Michael Ferguson of Cincinnati, OH; and one brother, Mordicai Ferguson. Also, surviving are five grandchildren: Dionte, Aysia, BJ, Tyler and Jacob along with host of other relatives and friends.  Visitation will be held from 6:00 - 8:00 P.M., Friday, March 16, 2018 at Ferrell-Chambers Funeral Home.  Funeral services will follow at 12 Noon, Saturday, March 17th with Minister Fred Comer, officiating.  Burial will follow at Forest Lawn Memory Gardens, Huntington.  Online condolences may be expressed to the family below. FC18-033

Mr. Excel "Ferg" Edward Ferguson, 72, of Huntington, WV, passed away on March 8, 2018 at Prattville Baptist Hospital in Prattville, AL.  Excel was born March 19, 1945 in Beckley, WV.  He is preceded in death by his parents, Dubois and Annie... View Obituary & Service Information

The family of Excel Edward Ferguson created this Life Tributes page to make it easy to share your memories.

Send flowers to the Ferguson family.