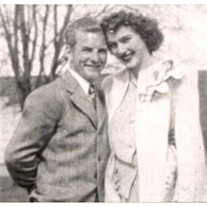 Garnet Virginia Cozzens, 86 went to be with the Lord on January 10, 2018.  Born on August 24, 1931, in Palmer Township, Stockport, OH, where she resided until her death.  Daughter of Clarence & Agnes Anderson.  "Ginny" was preceded in death... View Obituary & Service Information

The family of Garnet Virginia Cozzens created this Life Tributes page to make it easy to share your memories.

Send flowers to the Cozzens family.