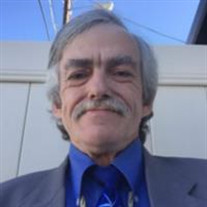 Of Huntington, WV, passed away June 28, 2021 at the age of Sixty-Six years, Two months & Six days. He was born April 22, 1955, to the late Alvin Lee and Elsie Jean (Pennington) Pettyjohn. Gary was a Native American advocate for missionary... View Obituary & Service Information

The family of Gary Lee Pettyjohn created this Life Tributes page to make it easy to share your memories.

Send flowers to the Pettyjohn family.