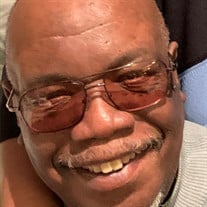 George Amos Jackson, Jr., son of the late George Amos, Sr. and Mary E. Jackson, was born January 14, 1950 in Lynchburg, Virginia. He received his early education through the public schools in Lynchburg. After graduating from the legendary E. C. Glass High School, where he excelled in football, George played two years of football at what was then Ferrum Junior College, a regional powerhouse located in Ferrum, Virginia. Upon completion of his education at Ferrum, he was recruited to play as a Defensive Back for Marshall University. In 1971, George became a member of the Young Thundering Herd, #23. He also played positions as an end and punt returner for the upstart team just after the infamous plane crash. A staunch Raiders’ fan, George took great pride in being a member of the Young Thundering Herd, as well as his brotherhood in the Kappa Alpha Psi, Fraternity, Inc. and his active membership in the Marshall University Black Alumni Association. Upon graduating from Marshall with a Bachelor’s Degree in Physical Education with a minor in Language Arts, George made his home in Huntington where he resided for the remainder of his time. His employment history began when he was hired as a Store Clerk, then promoted to Dairy Manager, at Big Bear Grocery Store, where he worked for ten years. Later he worked briefly as a Department Manager at Mr. Moneysworth Grocery Store; Store Manager at Radio Shack; Sales Supervisor for R. L. Polk; and enjoyed a lengthy employment as a new car Salesman at Moses, Inc. George changed his career path when he accepted a position as a Customer Service Representative for Applied Card Systems, where he remained until he was disabled with a stroke in 2005. In his college and post college days, he enjoyed playing tennis on Marshall’s campus courts and The AD Lewis Boys Club courts. In addition, George was an avid connoisseur of television; movies, sporting events, and concerts, fueled his passion for most all genres of music. He was somewhat of an amateur producer. The collection of his personal recordings ran the gamut from reel-to-reel, through Beta, VHS, and cassettes to CD’s. His latest collection included a variety of DVDs. George was a home body. He could always be found in the tv room, on the couch, with the remote in his hands, and his faithful Chihuahua “Myra” by his side, ready to talk sports and music with friends and family at anytime. George departed this life on the evening of December 29, 2021, at Cabell Huntington Hospital. He was preceded in death by both parents as well as his loving son, Jermon Jackson. He leaves to cherish his memories his wife and best friend, Jacqueline Jackson; beloved daughter, Shamara Jackson; step-children, Bonita Mosley and husband Derrick, Juanita Redman, Jamie Redman, and Bradford McMillian, II and wife Brittani. He was called “PePaw” by his twelve grandchildren—Jaysen (Sharese) Redman, Robert “Robby” Redman, RaShaun Lynch, Raven Ferguson, Michael “Mike-Mike” Redman, Jalin McMillian, Jamia Shook, Matthew Mosley, Erica Mosley, Deneen Mosley, Bradford “Trey” McMillian, III, and Brayden McMillian. In addition, “PePaw” had ten great-grandchildren; Jordan, Baby Jaysen, Zöe Olivia, Michael “Mister", Ava, Carli Ray, JoyAnna Lee, Lalani, Valeria, and Meela. He will be missed by his long-time friends Eddie “Blue” Dawson and "Mo" Dotson. A Celebration of Life Service will be conducted at 1:00 PM, Thursday, January 6, 2022 at Full Gospel Assembly, 2101 10th Avenue, with Bishop Samuel R. Moore, officiating. Family will welcome friends at 12 Noon. Burial will follow services at Spring Hill Cemetery, Huntington. Online condolences may be expressed to his family at www.ferrell-chambersfuneralhome.com. Strict COVID protocols will be in place. There will be no public repast. Services will be live streamed on the Full Gospel Assembly, Huntington Facebook page.

George Amos Jackson, Jr., son of the late George Amos, Sr. and Mary E. Jackson, was born January 14, 1950 in Lynchburg, Virginia. He received his early education through the public schools in Lynchburg. After graduating from the legendary... View Obituary & Service Information

The family of Mr. George Amos Jackson Jr. created this Life Tributes page to make it easy to share your memories.

Send flowers to the Jackson family.