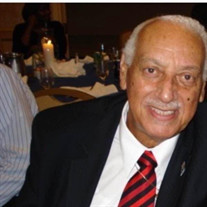 John David McCoy, Sr. John David McCoy Sr. 90, Of Huntington, W better know as "Katz Man or Moose" by his friends and family, passed away on May 02,2022 at the Emogene Dolin Jones Hospice House. He was born January 27, 1932 in Proctorville, OH. Proceeded in death by his Mother Vada Terry-McCoy-Ellis, Father Clarence Charles McCoy, Brothers Clarence Charles McCoy Jr. and Leon Orville McCoy, Grandmother Myrtle Vada Terri, Daughter, Tahlia Lynette Bell, Granddaughter, Tia Lynn Bell-Peterson, grandson Joseph Dante' Keeton, Great Granddaughter Kiana Lashae Keeton and Great Grandson Kyson Leland Keeton and a host of Grandparents, Uncles, Aunts, and Cousins. Additional survivors include his wife Donna Jean McCoy, children, John David McCoy Jr., Serge' Chaloff McCoy (Daughter-in-law) Tina McCoy and Jonna Davia McCoy-Singleton (Son-in-law) Daren Singleton. granddaughter - Davia Shamar McCoy. Great granddaughters - Dominique Bell-Rodrigues (Grandson-in-law) Fernando Rodrigues, Jasmine Bell, Ashley Bell. Great Granddaughter Ta'Niya Freeman. Grandsons Keith Bell and Christopher McCoy. Great Grandsons-Joshua Peterson Jaylan Dotson, Antonio Haughton. Great-Great Grandsons Dominic Peterson, Mozilla Bell, Josiah Bell and Si Bell. He developed an appreciation for music very early. He could already play the violin, trumpet, organ and piano before he entered Douglass High School. He stayed with family during the summers to attend classes at Juilliard School of Music. He said, "our Mother made us develop our talents and stay busy". While in high school, the three McCoy brothers formed their own group called "The McCoy Brothers Band". John's brother Leon played the piano, Clarence "Buddy" played the trombone, and John played the trumpet. At the age of eleven he was playing trumpet and piano in the Willie Kates Orchestra. They would perform at such places as The Frederick Hotel, Vanity Fair, the Dreamland Pool Pavilion in Ashland, KY and Ironton, OH. People were always telling us how great of a musician our Dad and how amazing a singer our mom is. Growing up in our house was like a music school. We had both sides teaching us and guiding us along. We remember waking up singing in the mornings with the family. Just having a good time praising God and making up songs. We would watch my mom and dad get songs ready for church and BYF of which my sister Jonna and I sang. Dad will play that piano or organ and make you cry, be happy or go "Oh my gosh how did he do that"? He can play anything too. He would get on that organ and use his feet to play the bass on the organ. It sounds like a bass player is in the room! John formed a band with Henry Pierce and Dick Howard was on TV in the summer of 1958 called, "The Johnny Davis Trio" performed during the summer of 1958 on Mondays between 6:30 and 7:00pm on WSAZ TV. John and Jean (Donna) played all over West Virginia. Even at Marshall University for huge events for years. Johnny and his brothers played unorganized basketball back before neighborhood youth leagues existed. They played in neighborhood alleys, friends' driveways and local playgrounds. The game of basketball would become far more than just a game of hoops for them; it would become a foundation that developed friendships that continue even today. By the time John McCoy and his brothers had reached high school, they were a force to be reckoned with on the basketball floor. In 1948, the principal of Douglass High School, Joseph Slash, along with McCoy, went to Monsignor Sylbester Staud who was an assistant pastor at St. Joseph Catholic Church at the time. Their reason for the visit was to establish a basketball competition between Douglass and St Joe High School. "It was either 1948 or '49 when we played, " McCoy said. "Our first game with St. Joe was played at the old Vanity Fair on 4th Avenue. We lost, but I still remember the notice in the sports section of the paper which read 'McCoy Brothers and Douglass High School to play St. Joseph at Vanity Fair." Dad said. After graduation from Douglass High School, there was a football scholarship at Kentucky State College and Virginia Union University. He was married at an early age and had to turn down another scholarship in basketball with Eastern Carolina. He also had a brief career in the Army. Divorce followed and John returned to Huntington. John was employed at the Nickle Plant for 33 years. John continued to be active in the community, as a lifeguard at AD Lewis Pool, he taught many children how to swim and play basketball. Was very active in church, worked with Rev. Charles Smith at O.I.C, and baptized at an early age. He attended First Baptist Church were he sang in the Chancel Choir. He also met his wife Donna Jean McCoy in this same choir and this June 15, 2022, it will be 60 years of marriage. John stayed active in church playing for all choirs and soloist. John became a ordained Deacon of First Baptist Church May 7, 2006. John loved the Lord with all his heart, and would share his knowledge of scripture and would pray for and with anyone. John would be the tirst one to tell you he was not perfect, and to love your neighbor as you love yourself

John David McCoy, Sr. John David McCoy Sr. 90, Of Huntington, W better know as "Katz Man or Moose" by his friends and family, passed away on May 02,2022 at the Emogene Dolin Jones Hospice House. He was born January 27, 1932 in Proctorville,... View Obituary & Service Information

The family of John David McCoy created this Life Tributes page to make it easy to share your memories.

Send flowers to the McCoy family.