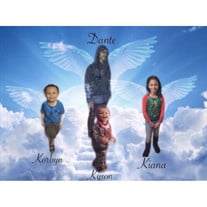 Joseph Danté Keeton 30, of Huntington, WV better known as "Dante or Tae" by his family and friends, passed away on April 20, 2020 at his home. He was born Monday, February 19, 1990 in Huntington, WV Son of Jonna McCoy-Singleton (Darren) of Columbus, OH and Joseph Donald Keeton Jr. of Huntington, WV. He was preceded in death by his Daughter Kiana Keeton, Son Kyson Keeton, Grandfather Joseph Donald Keeton, Sr. and host of Great Grandparents, Great Uncles, Great Aunts, and Cousins. Additional survivors include his Sisters Davia McCoy, Tameka Smith, and Sydney Keeton; Brothers Derek Keeton, Deron Keeton, Drew Keeton, and Daniel Keeton; Nephews Jaylan Dotson and Antonio Haughton; Niece Ta'Niya Freeman; Grandparents John (Donna) McCoy, Diane Keeton; Uncle Serge (Tina) McCoy; Aunts Donna Keeton and Debbie Keeton and cousins; Brittany Keeton and Jocelyn Scott. Dante' attended Spring Hill Elementary School, Gahanna Middle South, Gahanna Middle School East, Westerville Center High School, Cabell Midland High School, and Huntington High School. He received his GED with High Honors from the Cabell County Vocational School. During his time growing up he played little league, middle school, and high school football, basketball he was always #23, and baseball. He also played on traveling AAU Teams in Huntington, WV and Columbus, OH. He was a Boy Scout Member sponsored by Beverly Hills Baptist Church. Dante' sang in the choirs at school and at First Baptist Church BYF. He was baptized on August 18, 1999 in San Diego, CA by his Uncle and Pastor Serge' McCoy. Dante' attending Church at First Baptist Church of Huntington, New Salem Baptist Church of Columbus, OH, and Fifth Avenue Baptist Church. Dante' was a Direct Care Worker for Starlight Behavioral Heath for many years. Previously he was employed by Big Sandy Superstore Arena and Sprint Wireless. Dante' loved being the Father of Kiana and Kyson he was very proud of his children. Korbyn Leonard was a special part of his life and loved him as his own. He always wanted the best for them in life. He taught them unconditional love and how to respect others and wanted them to know the Lord and be active at their church. His kids, family, and friends were the most important part of his life, he never met a stranger. Dante was born into a family of aspiring artists. His birth in Hip Hop occurred in January 2005 pursuing his career in the summer of 2008 when he joined SMG based out of Huntington, West Virginia. SMG is one of the premier Hip Hop and R&B musical collectives in the Tri-state Area. Dante' has performed at a variety of open mic nights, local clubs, and special events, including a birthday party opening for Vaughn Anthony who signed with Dollaz Unlimited. Dante also opened for Blood Raw in 2008. The single "Do Ya Thang" by Dante featuring Mann Mann and Truth Hertz was featured on Who Hot Now All Star Weekend 2012 Mixtape by Zaytoven and DJ Exclusive released in March 2012. Dante' performed at Coast 2 Coast Mixtape Mixer NYC Edition on April 30, 2012. He continued pursuing music with group Thyrd World. His music was a snap shot of Dante' as an artist, compiled of self-produced beats with self-written lyrics as well as collaborations from other producers and musicians. As a form of expression, music allows Dante' to share thoughts, feelings, and experiences through artistical language. Dante' states, "All and all, music is not my ambition, it is my life!" A Home Going service will be conducted 11:00 A.M, Saturday, June 6, 2020 at The First Baptist Church of Huntington with Pastor John Porter officiating. Interment will immediately follow at the Spring Hill Cemetery, Huntington, WV. Visitation will be held from 6:00 to 8:00 P.M, Friday, June 5, 2020 at Ferrell-Chambers Funeral Home, Huntington, WV. Online condolences may be expressed to the family at Ferrell-ChambersFuneralHome.com

Joseph Danté Keeton 30, of Huntington, WV better known as "Dante or Tae" by his family and friends, passed away on April 20, 2020 at his home. He was born Monday, February 19, 1990 in Huntington, WV Son of Jonna McCoy-Singleton (Darren) of... View Obituary & Service Information

The family of Joseph Danté Keeton created this Life Tributes page to make it easy to share your memories.

Send flowers to the Keeton family.