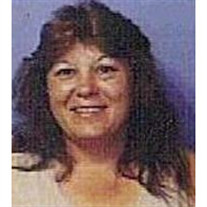 Linda "Yvonne" Heaberlin Johnson, 49 of Huntington passed away February 6, 2012 at her residence. She was born December 13, 1962 a daughter of the late Von L. Heaberlin and Lucille "Doris" Brown Heaberlin. Linda was preceded in death by five... View Obituary & Service Information

The family of Linda Y. Johnson created this Life Tributes page to make it easy to share your memories.

Send flowers to the Johnson family.