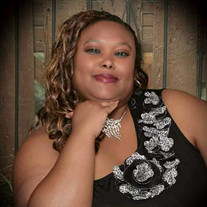 Lisa Yvette Jones, was a caring mother, grandmother, daughter, sister and friend. She left this world suddenly on September 10, 2021 at age 53. She was born to Rubien and Diane Jones on October 5, 1967 in El Campo, Texas. She accepted Christ at a young age; she was baptist at Rising Star Baptist church in Spanish Camp, Texas. While attending El Campo ISD she excelled in school while performing with the high school choir, she loved sports and played volleyball, basketball and ran track. Lisa graduated from El Campo High School in 1986 later she attended Wharton County Junior College for one year. She received a scholarship to attend University of Tennessee in Knoxville in 1987 and moved to Tennessee. While at college she met her former husband Alexis Edward Bostick; they were married March 20, 1991. Together they had 3 children, D’Angelo, Sequoia and D’Magio. Later she met David Rawlings and they had 3 children David, Malikk and Ebonii. Lisa had a sense for adventure and loved to travel any chance she got. She loved music and dance, especially anything with Michael Jackson but most of all she loved her children and did everything she could to give them a sense of purpose and dreams to follow. She hoped for one day to see all of her children be the best in anything they chose to pursue. Lisa is preceded in death by her father Rubien Jones, grandparents Jesse and Cora Jones, Oliver Murray, and Athylene Alexander. She leaves to cherish her memory, her Mother; Diane; Her sisters; Jakkie, Susan, Elois, her six children; four sons, D’Angelo Bostick, D’Magio Bostick, David Rawlings Jr., Malikk Rawlings; two daughters Sequoia Bostick, Ebonii Rawlings; Her three grandchildren; Gavin, Kamea, Aiko. Her nieces and nephews; Keotsha, Sha’cora, Ceionna, Alayna, Andre, John, Otis And a host of others loving relatives and friends. Ferrell-Chambers Funeral Home, Huntington, WV is handling arrangements. Online condolences may be expressed to the family on Lisa's Tribute Wall.

Lisa Yvette Jones, was a caring mother, grandmother, daughter, sister and friend. She left this world suddenly on September 10, 2021 at age 53. She was born to Rubien and Diane Jones on October 5, 1967 in El Campo, Texas. She accepted Christ... View Obituary & Service Information

The family of Ms. Lisa Yvette Jones created this Life Tributes page to make it easy to share your memories.

Send flowers to the Jones family.