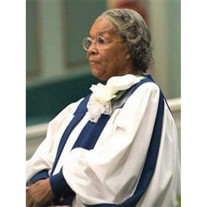 LOTTIE MAE "MAWMAW" CABELL Lottie Mae Cabell, affectionately known by the world as "MawMaw" and "Granny", 78, of Huntington, WV peacefully transitioned to her heavenly Father on Thursday, October 17, 2019. She was born on July 22, 1941 in Pikeville,... View Obituary & Service Information

The family of Lottie Mae Cabell created this Life Tributes page to make it easy to share your memories.

Send flowers to the Cabell family.