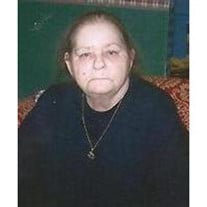 Margaret Jean Fortner, 76 of Huntington passed away December 14, 2012 at her residence. She was born December 16, 1935 a daughter of the late Archie Hatten and Myrtle Smith Hatten. She was a Homemaker and enjoyed donating to the Fellowship Life... View Obituary & Service Information

The family of Margaret Jean Fortner created this Life Tributes page to make it easy to share your memories.

Send flowers to the Fortner family.