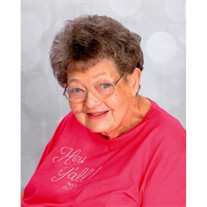 Mary Louise (Harshbarger) Saxton of Huntington, WV, born: March 29, 1927, passed away: March 16, 2020 at the age of Ninety-Two years, Eleven months and Sixteen days. She was the daughter of the late William Henry and Minnie Ellen (Randant)... View Obituary & Service Information

The family of Mary Louise Saxton created this Life Tributes page to make it easy to share your memories.

Send flowers to the Saxton family.