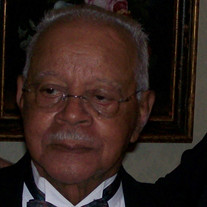 Atty. Nelson R. Bickley, Jr. Feb. 21, 1928 - Oct. 9, 2021 Nelson R. Bickley, Jr. was born in Cincinnati, Ohio and raised in Huntington, W.Va. He attended West Virginia State College where he discovered the love of his life, Ancella Radford. After graduation, Nelson enlisted in the army as an officer and spent twenty years serving in the Artillery, traveling with his young family, and moving up the ranks to become a Lt. Colonel. While at West Virginia University he mentored countless young men in the ROTC program. While working with those students, Nelson often created memorable statements, such as, “That was a plank in the lumberyard of useless information!” After he retired from the army, Nelson earned a Master’s in Counseling and became the head of the Office of Counseling Services at West Virginia State College. At 49 years of age he finally decided to pursue his life-long goal of becoming a lawyer. He graduated at 52 from West Virginia University. ​As a lawyer partnering with Pat Jacobs in Charleston, WV, Nelson enjoyed a twenty year law career and developed “Bick’s Laws” after seeing so many women being mistreated by their husbands. One “law” cautioned women to have jobs and their own income so that they would not be dependent. He was known for his compassion and sense of humor. Nelson leaves behind Ancella R. Bickley, his wife of 70 years; two daughters, Renee Hill ( Oliver, deceased) and Ancella Livers ( Charles); five grandchildren, Jananda Hill (Duncan Burns), Maia King, Jamaa Bickley-King, Lateef Livers ( Melanie), and Akil Livers, (Cathryn); four great-grandchildren, Jelani Ferrell, Julian Ferrell, Jaden Ferrell, and Amari Livers; and a host of beloved nieces and nephews. He will be deeply missed. In lieu of flowers, please send donations made out to the Brown W. Payne Scholarship Fund, which supports black law students. Donations may be mailed to the Mountain State Bar Association Attn: Cheryl L. Henderson, Esq. 711 5th Avenue Huntington, WV 25701 A Graveside service will be held 1:00 PM, Wednesday, October 20, 2021 at Spring Hill Cemetery, Huntington, WV. Ferrell-Chambers Funeral Home, Huntington, WV is honored to assist the Bickley family. Online condolences may be expressed to the family at Ferrell-ChambersFuneralHome.com.

The family of Atty. Nelson R. Bickley Jr. created this Life Tributes page to make it easy to share your memories.

Send flowers to the Bickley family.