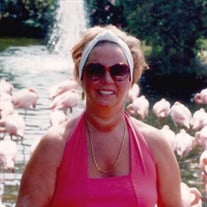 Patricia Joanne Hoopert Patricia Joanne Hoopert, surrounded and embraced by the love of her family, quietly passed away on June 26, 2021, at the age of 83. She was from Reedsville, WV, formerly from Baltimore, MD. She was born in Kentucky on April 21, 1938. Joanne was preceded in death by her loving parents Lloyd Etheridge and Helen Duley Etheridge. Her beloved brothers Jack and Eugene Duley. She was also preceded in death by her beloved children David Kenney (wife Theresa) and Denise Louis White. She is survived by her loving husband Jerry Bruce Hoopert who she married on December 26, 1986. She is survived by her children, Tina Hamman and her husband Ben, Edmund Cross, and his wife Colleen. Also, by her children that she has missed for many years, Victoria, and Christopher. She is also survived by grandchildren Ashley, Lucas, Christina, Ben, Olivia, and Joshua; Great-Grandchildren Noah, Lexus, Jazzalynn, Azari, Michael, Michael, Delilah and Klaire. She is also survived by her sister Jane Norris (husband Regis) of Ithica, MI, her sister Wanda Vinson of New Port Richey, FL, and her brother Marlin Miller (wife Carol) of Nottingham, MD, and many nieces and nephews. Joanne was free spirited and was the life of the party. She will be missed dearly. Ferrell-Chambers Funeral Home, Huntington, WV is honored to assist the Hoopert Family. Online condolences may be expressed to the family at Ferrell-ChambersFuenralHome.com

The family of Patricia Joanne Hoopert created this Life Tributes page to make it easy to share your memories.

Send flowers to the Hoopert family.