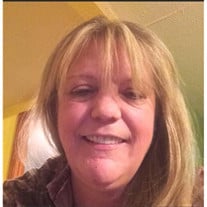 Penny Marie Carper Richmond Penny Marie Carper Richmond, 56, of Hamlin, WV, went to be with the Lord on Friday, October 9th, 2020. She was born September 23rd, 1964, in Hamlin, West Virginia, to the late Billy Darrell Carper and Barbara Sue Stanley Carper. She was preceded in death by her husband, Rodney Richmond, her companion Jeffrey Adkins, as well as her sisters, Diana Kay Carper, Patty Jean Carper, and Dixie Carper Frye; two brothers, Billy Darrell Carper and Billy Dean Carper. She leaves to mourn her passing her brothers, Ricky (Kathy) Carper, Freddy (Cynthia) Carper, Randy Carper; and sisters, Lillie (Michael)Adkins, Kim (Moe) Moyer, Tammy (Joe) Vinson. She also leaves to mourn her passing a special nephew, Heyden Skeens, and a special friend Jarrell Adkins, along with a host of nieces and nephews, family and friends who love her very much. The family wants to give a special thanks to Dignity Hospice, Jeff Black, and Chuck Egnor. Upon the request of Penny, there are no funeral services, and Penny will be cremated. Ferrell-Chambers Funeral Home is assisting the family with arrangements

The family of Penny Marie Carper Richmond created this Life Tributes page to make it easy to share your memories.