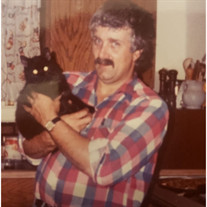 Roger Lee Bailey of Huntington, West Virginia was born on December 14th, 1952. He passed away at his home on Sunday, July 26th, 2020. Roger was an avid outdoorsman, he loved hunting, trapping and fishing. He also enjoyed fixing cars, and almost... View Obituary & Service Information

The family of Roger Lee Bailey created this Life Tributes page to make it easy to share your memories.

Send flowers to the Bailey family.