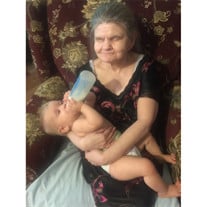 Ruby Jane BraggOf Salt Rock, WV entered her heavenly home on June 6, 2020 at the age of sixty-eight years and twenty-seven days after a long battle with cancer. She was born May 10, 1952 to the late Fulton and Mary Ethel (Burns) Bragg. She is... View Obituary & Service Information

The family of Ruby Jane Bragg created this Life Tributes page to make it easy to share your memories.

Send flowers to the Bragg family.