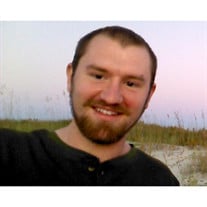 SAMUEL DAVID LANHAM, 25 of Charleston, WV passed from this life to be home with Jesus, October 7, 2017. Samuel was born September 15, 1992 to David Roy and Angela Lynn Lanham of Clay County, WV. Sam attended Watts Elementary, Stonewall Jackson Middle and WV State Collaborative Program. Sam loved Charleston, particularly the Westside where he was raised. Sam had a gentle, warm, and giving personality. He loved dogs and became an expert on dog breeds. He camped extensively with his mother and sister, including many trips to Cranberry River and summer trips to Assateague Island National Seashore in MD and beach house vacations on Oak Island, NC. Sam had a curious mind and a deeper understanding of people's feelings and needs than most of his elders. Known for his hilarious sense of humor and big smile, he was also a fantastic cook. Sam battled learning disabilities and later mental illness. We will miss our son, brother and friend. Sam is survived by his mother, Angie Brown, father David Lanham; sisters, Laura, Sydney & Marina Lanham; brothers, Austin Lanham & David Gross; stepfather, Frank Brown and many aunts, uncles, and cousins. A memorial service will be held at Trinity Missionary Baptist Church, Route. 36 in Clay County on Sunday, October 15 at 4 P.M.  Directions to church...Take I79 north to the Wallback exit, take a right onto Route 36 and travel 6.3 miles to the church which is located on the left. After his services, there will be a dinner at the church. Our family wishes to thank the many friends, doctors and family who have offered their time, condolences and assistance in our time of grief and loss. In lieu of flowers, the family asks that donations be made to the Kanawha County Animal Shelter in Sam's name. Condolences may be expressed to the family at www.ferrell-chambersfuneralhome.com.17-112

The family of Samuel David Lanham created this Life Tributes page to make it easy to share your memories.

SAMUEL DAVID LANHAM, 25 of Charleston, WV passed from this life...

Send flowers to the Lanham family.