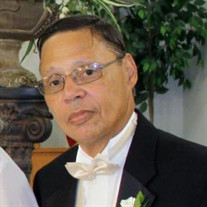 Elder Thomas T. Hill, of Huntington, WV went to be with The Lord on Wednesday, November 24, 2021 at the age of 74 years old. Thomas was born on November 21, 1947 to the late Geraldine Clark in Huntington, WV. Elder Thomas T. Hill is preceded in death by his mother, Geraldine Clark; mother-in-law, Ardith Payne; and a number of uncles and aunts. Elder Hill graduated from Huntington High School in 1966 and received his associate degree from the WV College of Business. Shortly after graduating from high school, he was drafted into the Army where he served during the Vietnam War. For over 20 years, Elder Hill worked at Mack and Dave’s. During his employment, he was able to hire and train many employees. He was also employed at Conner Steel until it closed. He then began a career as an appraiser for Cole – Layer –Trumble Co. Inc. He also worked for the Corp of Engineers. While he was a volunteer at A. D. Lewis, he was offered the position of Executive Director of the A. D. Lewis and Fairfield East Community Centers. While he was the director, he touched many lives and became the “Dad” of the community. He was an advocate for the youth of the community and tried to keep them on the path to success. Elder Hill also volunteered at the Marshall University radio station, WMUL, for over 25 years as the gospel music director. He implemented the gospel bulletin board that kept the entire community informed. He loved his community and help in any way he could. Elder Hill began his relationship with the Lord at a young age while attending Calvary Baptist Church. He later became a member of the Original Glorious Church of God in Christ where he received the Holy Ghost and became an Elder. He became the Pastor of God’s House of Prayer and Praise after leaving the Original Glorious Church of God in Christ. His love for God and the Gospel was paramount in his life. Fasting and praying was his ministry and he would encourage all to seek a personal relationship with God. He leaves to cherish his memory his wife, Anita Hill; his children, Thomas (Kathryn), MaRia (Antwane), Shelley (DuRon) Beth and David (Afratidee) whom he raised as his own; sisters, Gerri Allred and Ann Hill of Huntington, WV; sisters-in-law, Mary Payne-Washington of Las Vegas, NV, Francis Payne of Columbus, OH, Pamela (David) Bailey and Ardith Payne of Huntington, WV; brother, Robert (Doreatha) Hill of Greenup, KY; and brothers-in-law, Edward Payne of Huntington, WV and William (Sheila) of Richmond Hill, GA. Also, surviving are his 14 grandchildren: Payne, Myia, Will, Chandler, Gabriella, Mahki, Caleb, Elias, Amara, Erica, Lakisha, Kyra, Dionne and Marcus; and a host of great-grandchildren, nieces, nephews, cousins, other family members and friends. The family would like to give a special thanks to the Veterans Home Health Care for taking such good care of our husband and father. A Home Going Service will be conducted at 1:00 P.M., Friday, December 3, 2021 at God's House of Prayer and Praise with Elder George Scott, officiating. The family will welcome friends at 12 Noon. Burial will follow services at Spring Hill Cemetery, Huntington. Online condolences may be expressed to the family at www.ferrell-chambersfuneralhome.com.

The family of Mr. Thomas Tyrone Hill created this Life Tributes page to make it easy to share your memories.

Elder Thomas T. Hill, of Huntington, WV went to be with The Lord...

Send flowers to the Hill family.