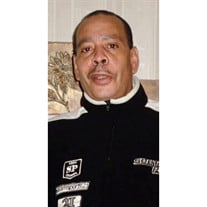 William Lowell "Chop" Cooper, 65 of Huntington, WV, better known as "Chop," by his family and friends, entered his Heavenly home on Sunday, June 14, 2020. He was born on January 20, 1955, in Huntington, WV, a son of the late Clyde E. Cooper, Sr. and Janet D. (Pettus) Cooper. Chop accepted Christ as his personal savior in his mid-30s and attended Young Chapel A.M.E. Church in Huntington from time to time throughout the years.  He enjoyed the outdoors very much.  In his youth, he loved horseback riding and fishing with family and friends.  He also enjoyed cooking and having family gatherings.  He especially enjoyed the cookouts on "Cooper Fridays." Chop had many talents and worked various employment jobs, which included the American Car and Foundry Company, part-time for WV American Water Company, and mover for Martin Transfer.  Chop was an intelligent, talented, and funny man with great charm and wit. He possessed many characteristics, such as being a strong leader, a hard worker, a risk-taker, a wonderful listener, a very reasonable man, had a heart of empathy, and last but far from least, very compassionate. He was a man of a few words; however, he touched the hearts and lives of many with his charming personality and his love of others. He never met a stranger. Chop was a loving father, brother, uncle, companion, and a dear friend with a wonderful heart.  He was also a pillar of his community in the City of Huntington. He was preceded in death by his mother and father, Clyde E. Cooper, Sr., and Janet D. (Pettus) Cooper, his maternal and paternal grandparents, and a special friend/uncle, Harold Hill. Chop leaves behind to cherish his memory, his life companion, Rita Cooper of Huntington, WV; daughter, Candice Daugherty of Newport News, VA; stepson, Michael Harris of Huntington, WV; siblings, Clyde E. Cooper, Jr., Linda G. Buckhannon (James), Tyrone Cooper, Richard N. Howard, all of Huntington, WV, Michael Cooper (Deborah) of Charlotte, NC, and Marshall Cooper (Tracey) of Cherry Hill, NJ. Additional survivors include his grandchildren, Bri'Elle Daugherty, Micheal  Daugherty of Newport News, VA and Allen Mykal Singer; nieces, MaDai Cooper-Leffler, Kayla Cooper, Shara Nichole Swann, and Chevali Bellomy; nephews, Bruce France, Clyde Cooper, III, Nico Cooper, Shaquan Cooper, and Cameron Cooper; special friends and family; Clyde Perry (Truecella) of Huntington, WV, Lynn Grayson of Atlanta, GA, Leon White, Mr. and Mrs. Jay Cooper, Stewie Jordan and Bruce C. France, Sr. all of Huntington, WV. "I have fought a good fight, I have finished my course, I have kept the faith." 2 Timothy 4. A Celebration of Life Memorial Service will be conducted at 12 Noon, Saturday, June 27, 2020 at Ferrell-Chambers Funeral Home with Pastor Oliver Banks, officiating.  Family will welcome friends at 11:00 A.M.  Online condolences may be expressed to the family below. If you are unable to attend Chop's Celebration of Life, we will be live streaming services. Join Zoom Meeting https://us02web.zoom.us/j/89535348780 Meeting ID: 895 3534 8780 Password:074136 FC20-051

William Lowell "Chop" Cooper, 65 of Huntington, WV, better known as "Chop," by his family and friends, entered his Heavenly home on Sunday, June 14, 2020. He was born on January 20, 1955, in Huntington, WV, a son of the late Clyde E. Cooper,... View Obituary & Service Information

The family of William Lowell Cooper created this Life Tributes page to make it easy to share your memories.

Send flowers to the Cooper family.