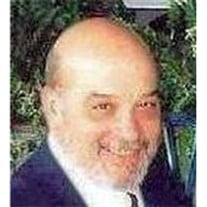 WILLIAM RUSSELL "BILLY" RILEY, JR. a life long resident of Huntington, WV passed away on Monday, January 14, 2013, at age 61. He was born August 14, 1951, son of the late William Russell Riley of Tampa, FL and Irene Stevens Hogsett of Huntington. Bill attended Lincoln Junior High and Huntington High School before enlisting in the Army. Billy proudly served in Vietnam with the 173rd Airborne. Bill was extremely proud to be a member of "The Fatboys", a group of childhood friends who went on to serve their country during the Vietnam era and formed a lifetime bond and brotherhood. He was an avid supporter of Marshall University athletics. Bill retired from The City of Huntington in 2010. He is survived by a daughter, Heather Walker Rossi and husband Anthony, Wesley Hills, FL and two grandsons, Justin and Kyle; sister, MaryEllen Clark of Greensboro, NC, nephews, Brian Clark of Durham, NC, Jonathan Clark and wife Jan of Dadeville, AL, and David Clark and wife Jennifer, and daughter Stephanie of Chester Springs, PA. Cousins Linda and Larry Wellman of Gainesville, VA, John "Jake" Black of Huntington, WV and many friends. Special friends Charles Bellomy and David Long were like brothers to Bill. The family expresses their love and gratitude for all they have done through the years for Billy. A memorial service will be held Saturday, January 26, 2013 at 2:00 PM at Ferrell-Chambers Funeral Home, 924 20th Street, Huntington, WV.

The family of William R. Riley created this Life Tributes page to make it easy to share your memories.

Send flowers to the Riley family.